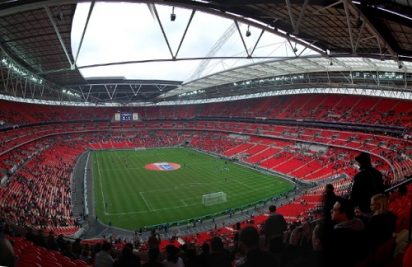 Wembley Stadium is the home of English Football. The original stadium was built in 1923 and known as the Empire Stadium, remembered for its iconic twin towers designed by Sir Robert McAlpine.

The original Wembley Stadium was host to the annual FA Cup and League Cup matches and the Rugby League Challenge Cup since 1929.

Notable other dates in its eighty year history were the London Olympics of 1948, the memorable 1966 World Cup Final which England won against Germany score 4-2 after extra time. The Rugby League World Cup Finals of 1992 & 96 and the Finals of the European Championships in 1996.

Pelé said,”Wembley is the cathedral of football. It is the capital of football and it is the heart of football”, in acknowledgment of Wembley’s position as the world’s best-known football stadium.

In 2003 the stadium and its iconic twin towers was demolished to make way for the stadium we have today with its radial arch designed by Foster & Partners. Opening in 2007 and with a seating capacity of 90,000 Wembley Stadium still retains its world class status as a top sporting venue.

While Tottenham’s new stadium is being built, their home for this season has been at Wembley. Although we are getting to the latter part of the Premier League season there are still five home Spurs matches to go and see.

Dates for your diary are the weekend of Saturday 21st & Sunday 22nd April, this is when the Semi-Finals of the FA Cup will take place.

Then on Saturday 5th May the SSE Women’s FA Cup Final takes place. After last year’s high scoring match between Manchester City and Birmingham’s ladies one will be hoping for a similar great match between the finalists this year.

Finally on Saturday 19th May will be the Emirates FA Cup Final.  As Arsenal were knocked out in the 3rd round, we know there will be a new name on the cup this season.

With the World Cup being held in Russia 14th June to 15th July this year, England will be taking part in two warm up matches before they leave. The first of these will be against surprise non qualifiers Italy on Tuesday 27th March followed by Nigeria on 2nd June

It is nearly 90 years since the first Rugby League Challenge Cup Final was held at Wembley Stadium when Wigan (the most successful Challenge Cup team) beat Dewsbury 13-2 in 1929.

This year’s final takes place on Saturday 25th August after a nine month long competition that starts out featuring many grassroots clubs and climaxes with a spectacular final at Wembley.
The current cup holders are Hull  who will be looking to make it three Challenge Cup wins on the bounce if they get to this year’s final. Having won it in 2016 against Warrington Wolves and narrowly beating Wigan Warriors 18-14 in last year’s pulsating final.

This year sees the The Philadelphia Eagles the reigning Super Bowl Champions take on Wembley regulars Jacksonville Jaguars and Tennessee Titans with the fourth team taking part being the LA Chargers. Link to NFL PAGE

There is sure to be a great atmosphere at Wembley Stadium for these matches as three of the teams will be playing regular-season games in Wembley.

Which one of these 5 Great Sporting Events to See At Wembley Stadium 2018 will you be attending…?

There are various ways for sporting fans to travel to Wembley by rail, TFL Tube or by bus.

However, if you wish to make your day into a special occasion you might wish consider making a London chauffeur services car booking

This will allow you and your guest’s time to relax and travel to the event in comfort without the trouble of worrying about taking public transportation and to look back on what will undoubtedly be some great weekends of sports.