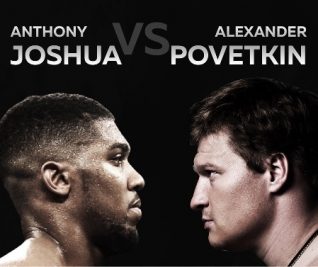 Joshua who has successfully defended his titles on two previous occasions firstly against Carlos Takam and then Joseph Parker was looking for a heavy weight unification fight against WBC (World Boxing Council) champion Deontay Wilder. However, this fight did not materialise, instead Joshua has to fight the mandatory challenger Alexander Povetkin or risk losing one of his heavyweight champion belts.

In Alexander Povetkin, Joshua is likely to fight a very accomplished and hard hitting boxer. Povetkin previously held the WBA (World Boxing Association) title from 2011 to 2013.

Povetkin’s last fight was against British boxer David Price at the Principality Stadium, Cardiff back in March of this year. This fight was the undercard bout to the Joshua V Parker fight the same night.  David Price fought well in the early rounds and nearly got lucky by knocking down Povetkin at the end of the third round. However, that is as far as his luck went as after a further two brutal rounds of boxing it was Alexander Povetkin who came out on top with a knockout in the fifth.

This was Alexander Povetkin’s eighth consecutive victory since his only loss, to Wladimir Klitschko back in 2013.

Watford born Joshua won a gold medal at the 2012 Olympics in London. Four years later after turning professional he beat Wladimir Klitschko in a thrilling fight at Wembley Stadium to become the heavyweight champion of the world.

Joshua has been described as the best current heavyweight boxer in the world known for having exceptional punching power which he will most probably need against his challenger.

With the fight being just under 2 months away several leading boxing pundits and trainers have said that Joshua should not underestimate the 38 year old Alexander Povetkin. This will make for a thrilling night of boxing at the Wembley Stadium showdown which will no doubt draw another bumper 90,000 crowd to roar Joshua on.

Rather than going with the masses by train or tube to watch this epic fight. You might wish to consider booking yourself one of our London chauffeur cars to take you and guests to the big fight.

We are able to supply a range of vehicles to suit all party sizes from our Range Rover Autobiography, Mercedes S Class and V Class (People Carrier), or if you have a larger party of guests we can also arrange a Minibus or Coach. Leaving you time to relax and enjoy what should be a fantastic night of world class boxing.