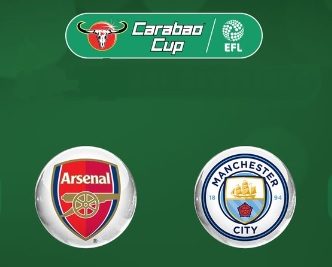 There is just over three weeks to go till the Carabao Cup Final at Wembley. Kick off will be at 4:30pm, Sunday 25th February.

The 2017/18 EFL Cup is in its 58th season since it started in 1960. The annual competition, currently called the Carabao Cup after a sponsorship deal with the Thai Energy drinks company of the same name includes all 72 clubs of the English Football League along with the top 20 Premier League teams.

This year’s final will be held between Manchester City and Arsenal.

Manchester City clinched their place in the final after a surprisingly close match, finally beating Championship side Bristol City 5-3 on aggregate over the two legs.

However, Man City’s overall form this season has been very dominant and the Carabao Cup could be there first piece of silverware.

Their opponents Arsenal however, will have other ideas after they reached the final with a 2-1 victory over Chelsea over their two legged semi-final.

Although Arsenal’s Premier League form of late hasn’t been great, they will be wanting to put this behind them. As their last trip to Wembley in a Cup Competition resulted in them winning the FA Cup last season.

With 80,000 plus expected for the Carabao Cup Final, the atmosphere should be electric. The Arsenal fans will be seated in the West End of Wembley Stadium, with Manchester City fans being in the opposite East End.

Throughout its nearly sixty year history the EFL Cup has always provided football fans a few shocks and nail biting results. Some of the more unlikely winners have been Swindon – 1969, Oxford United – 1986 and Luton Town in 1988. Some eighteen of the matches have ended up being completed after extra time and in the days of match replays, five matches have ended up being settled this way.

After the introduction of a penalty shoot-out to decide the winner of the EFL Cup, this has happened on three separate occasions. If anything gets a football fans emotions going it is a closely contested match, followed by extra time and then a penalty shootout.

So if you are lucky enough to be attending this year’s Carabao Cup Final at Wembley, Sunday February 25th to see Arsenal v Man City how do you get there?

You might considering driving your own car, however be aware unless you have pre-booked your own parking you could be in for a long walk as the local council and police enforce a strict no parking zone around Wembley Stadium and the surrounding area.

There is public transport, local bus services, the TFL Tube Network or the National Railway services, these tend to get very busy.

Alternatively, you might wish to consider booking your own private chauffeur driven car. This gives you and your guests’ time to relax and travel to the match in comfort without the stress of worrying about taking public transportation or looking for somewhere to park your own car and to look back on what will be a fantastic Carabao Cup Final game of football between two great Premier League football teams.