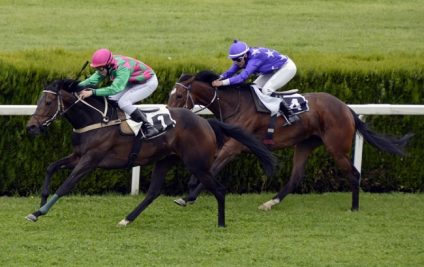 If you are a horseracing fan then you will no doubt be looking forward to the Cheltenham Festival Races the highlight of the jump racing season. With the winners collecting approximately £4.6 million in prize money , Cheltenham attracts over a quarter of million spectators over the four days.

The highlights being The Champion Hurdle, the Queen Mother Champion Chase, the Stayers’ Hurdle and the Cheltenham Gold Cup

There’s two things that make this day very special at Cheltenham out on the course there is the horseracing, the top race of the day is The Betway Queen Mother Champion Steeple Chase worth over £350K to the luck winner. Trackside, just as competitive is the Ladies Day Competition – known as #ColourMeMarch not only will this add a splash of colour to an already stylish day of horseracing, but the lucky lady who wins will receive a Mini One car.

Day 3 of the Cheltenham Festival Races coincides with St Patricks Day, so there is sure to be a great party atmosphere around the racetrack. With seven races during the day, the top one being The Sun Bets Stayers’ Hurdle. The vast majority of the crowd will be wanting an Irish winner or two.

The climax of the Cheltenham Festival Races comes on the last day with The Timico Cheltenham Gold Cup. With a great list of horses and riders been gathered for this year’s Gold Cup, including Sizing John (2017 winner) Might Bite, Native River and Djakadam. The jockeys horses and trainers will be looking for a share of the £625K prize for the winner, the richest Grade 1 chase horserace in Britain.

If the excitement of the last days racing at Cheltenham wasn’t enough. Friday is also when the most successful jockey of the week is decided too. For the past ten years this has been dominated by Ruby Walsh. However, this looks likely to change this year as Ruby unfortunately broke his leg in a horse race back in November last year.

With four days of top class horse racing to be enjoyed at Cheltenham you will no doubt be looking at the best way to travel there..?

Cheltenham is just over 90 miles from the Centre of London. From past experience of attending the Cheltenham Festival, although you can catch the train from Paddington to Cheltenham Spa, it’s still approximately 2.5 miles from the racecourse